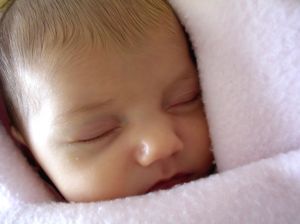 Facebook is a wonderful, magical place for many people. After all, it lets us keep in touch with friends old and new. It allows us to be cyber stalkers without using the term “stalker” (but you know you are a bit of a stalker when you’re browsing your friends’ walls and reading other people’s comments). It gives everyone an outlet to share interesting links and videos, and it allows us to share photos of our kids and other happenings in our lives. Facebook is awesome — there’s no denying that. But would you let Facebook users of the world name your baby?

That’s what one Toronto mommy-to-be is doing. 34-year-old Rommy Alpinelli, who is expecting a baby girl on December 4, is giving power to the people . . . the people of Facebook that is. The expectant mother is leaving the name of her first born child to Facebook users and online voters.

Rommy and her husband just couldn’t come up with the perfect name for their daughter. They discussed their dilemma with a close friend, who just happened to work in sales for FabFind — a Canadian social commerce website that offers discounted deals on a variety of products. FabFind decided to do something a bit unconventional. They offered the Alpinellis a deal.

FabFind will give the Alpinelli family a year’s worth of free deals, which has an estimated value of $40,000, in exchange for the Alpinellis’ cooperation in allowing Facebook users to vote on the baby’s name. The Alpinellis must present the company with the baby’s birth certificate in order to claim their prize.

FabFind has even set up a custom applications for Facebook users to submit names and cast their votes: www.facebook.com/FabFindToronto.

You can submit and vote on the baby’s name until Rommy gives birth in a few days. The person who submits the top vote-getting name will receive 25,000 reward points, which can be used to redeem for FabFind deals. People from all over the world can submit names and vote, but only Canadian residents (outside of Quebec) can claim the prize.

“I was a little apprehensive … ‘What if it’s a terrible name that I just absolutely hate?’ But then as people started submitting their entries and voting, the names that are pushed up were all so pretty,” Rommy Alpinelli told a reporter from the Winnipeg Free Press.

As of this writing on Thursday, December 2, over 2,600 Facebook users have voted and the top names are Melania, Aria, and Willow.

There’s no denying that FabFind has taken the social networking movement to a whole new level! But what do you think? Would you leave the name of your firstborn daughter to strangers?

I’m of the opinion that a baby’s name is special and should be wrought with meaning. But babies are expensive and for $40,000 worth of products, I may just agree. I mean, how hard would it be to change the child’s name on paper after the year is over? (I have no clue if you can even do that, but I’m guessing it’s possible.)