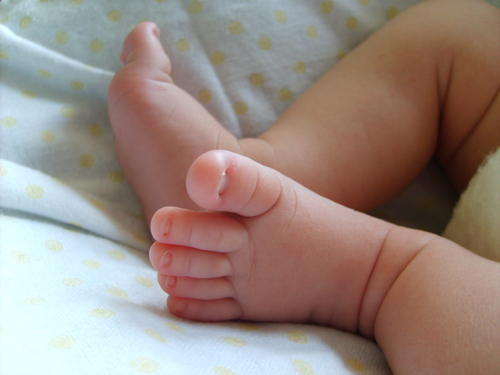 Having a little boy comes with a big decision – should you circumcise your baby? Circumcision is a hot button topic. It ranks up there with baby ear piercing (which happens to be one of my most controversial, intensely debated articles).

There are pros and cons of circumcision, and the choice is ultimately the parents.

The American Academy of Pediatrics (AAP) used to be neutral on the subject of circumcision. But in 1999, they changed their opinion and they do not recommend routine circumcision. The AAP argues that circumcision is not essential to your baby’s health, so as parents, you must choice what is best for your son. You should think carefully about the benefits as well as the risks of the procedure.

As of January 2012, the American Academy of Pediatrics does not recommend all baby boys to be circumcised. The benefits are not sufficient for them to recommend circumcision. However, by August of the same year, there was new evidence that the health benefits outweighed the risk for infant male circumcision. The American Academy of Pediatrics revised their policy statement, and still said that the health benefits were not strong enough to recommend routine circumcision for all little boys. So the choice to have your son circumcised is still up to you – the mom and dad.

Circumcision is the surgical removal of the foreskin (which is the loose sleeve of skin that covers the end of a boy’s penis).

In the United States, if you choose to have your baby boy circumcised, it is routinely performed before the baby leaves the hospital – usually within the first 48 hours after birth.

Circumcision can also be done after the newborn period, but it comes with more risks and it is more complicated.

Circumcision is more popular in the Canada, the United States, and the Middle East. It is rarely performed in Europe, Asia, Central and South America.

Why Circumcise Your Baby?

Many parents circumcise their little boys because of the potential medical benefits to the procedure.

The health reasons for circumcision are heavily debated in the medical community, and some professional organizations – like the American Academy of Pediatrics – cite that there is not enough evidence that circumcision is actually medically beneficial.

There is some evidence (backed by scientific studies) for why parents might want to circumcise their babies. The benefits of circumcision include:

1.Easier Hygiene – Keeping the penis clean is much easier with a circumcised penis. Boys who are not circumcised will need to gently pull back the foreskin to rinse the head of their penis and the inside fold of the foreskin.

3.Lower Risk of Penile Cancer – Circumcised boys have a lower risk of developing cancer of the penis. This type of cancer is extremely rare, though. Only 1 in 100,000 men will develop penile cancer, and only about 300 men die from the disease annually. In addition to having an uncircumcised penis, other risk factors for cancer of the penis include the human papilloma virus (HPV), smoking, having AIDS, and being over age 65.

4.Prevents Foreskin Infections – Because circumcised boys do not have foreskins, they do not get foreskin infections. Uncircumcised men can occasionally have irritated foreskin, but this is easily treated with antibiotics.

5.Decreased Risk for STDs – Some data suggests that circumcision may help prevent sexually transmitted infections, like Chlamydia, HPV, and genital ulcer disease. Women who have sex with uncircumcised men are at higher risk for getting cervical cancer. There is also some evidence that supports circumcised men have a little bit more protection against HIV.

Risks of Circumcision – Why NOT to Circumcise

Circumcision is a surgical procedure, so it does carry some risks. Because circumcision is routinely done, the risk of problems is low (under 3 percent).

Before you make the decision to circumcise, you need to have the doctor explain the risks and benefits of circumcision to you. You need to provide written consent before the procedure is performed.

For decades, virtually all American parents were circumcising their babies. Everyone was doing it, so all boys had the procedure done. Today, the percentage of circumcision is steadily decreasing.

According to the National Hospital Discharge Survey, in 1999, only about 65 percent of newborn boys were going home circumcised. By 2008, this same survey showed that in-hospital circumcisions dropped to 56.9 percent.

Only half of all baby boys are getting circumcised today.

Despite the decline in circumcision statistics, an estimated one million baby boys are circumcised every year in the United States. It is one of the most common surgical procedures performed.

The U.S. Centers for Disease Control and Prevention (CDC) report that circumcision is typically more common in babies who are born to weather families (higher socioeconomic status), and little boys born in the Midwest and Northeast.

How to Care a Newly Circumcised Penis

If you decide to have your baby boy circumcised, it’s important that you keep the genital area clean. You do not want it to get infected.

For most babies, it will take between 7 and 10 days after the circumcision procedure before the penis is healed. At first, the tip of your baby’s penis may look bruised, swollen and red. There may also be some blood on the diaper. Sometimes, there may be a yellow crust on the penis.

You need to contact the doctor if is persistent bleeding, continued redness, a fever, pus-filled blister, foul-smelling discharge from the penis, or any other signs of infection. You should always contact the pediatrician if your baby does not start normal urination within 12 hours after getting circumcised.