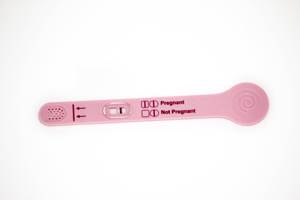 It’s been in the news lately. The Drudge Report first reported it, and now news outlets all across the United States are reporting this new hot trend – women are selling their used, positive pregnancy tests online, most notably on Craigslist.

Used, positive pregnancy tests are being sold anywhere from $20 to $40 a test. With home pregnancy tests pretty cheap to buy – $1 at dollar stores and discount marts – this is a pretty ingenious way to make some extra cash.

And if you’re like me, you’re probably wondering why anyone would want a used, positive pregnancy test.

It’s simple – what better way to get commitment phobic boyfriends to propose than to “prove” to them you’re pregnant? Plus, it’s a fun way to freak out your family and friends. It’s a pretty hilarious April Fools joke, too.

Craigslist is infamous as a marketplace for bizarre items you would never even think of selling or buying.

So what do you think of this new craze? Would you buy a used, positive home pregnancy test?