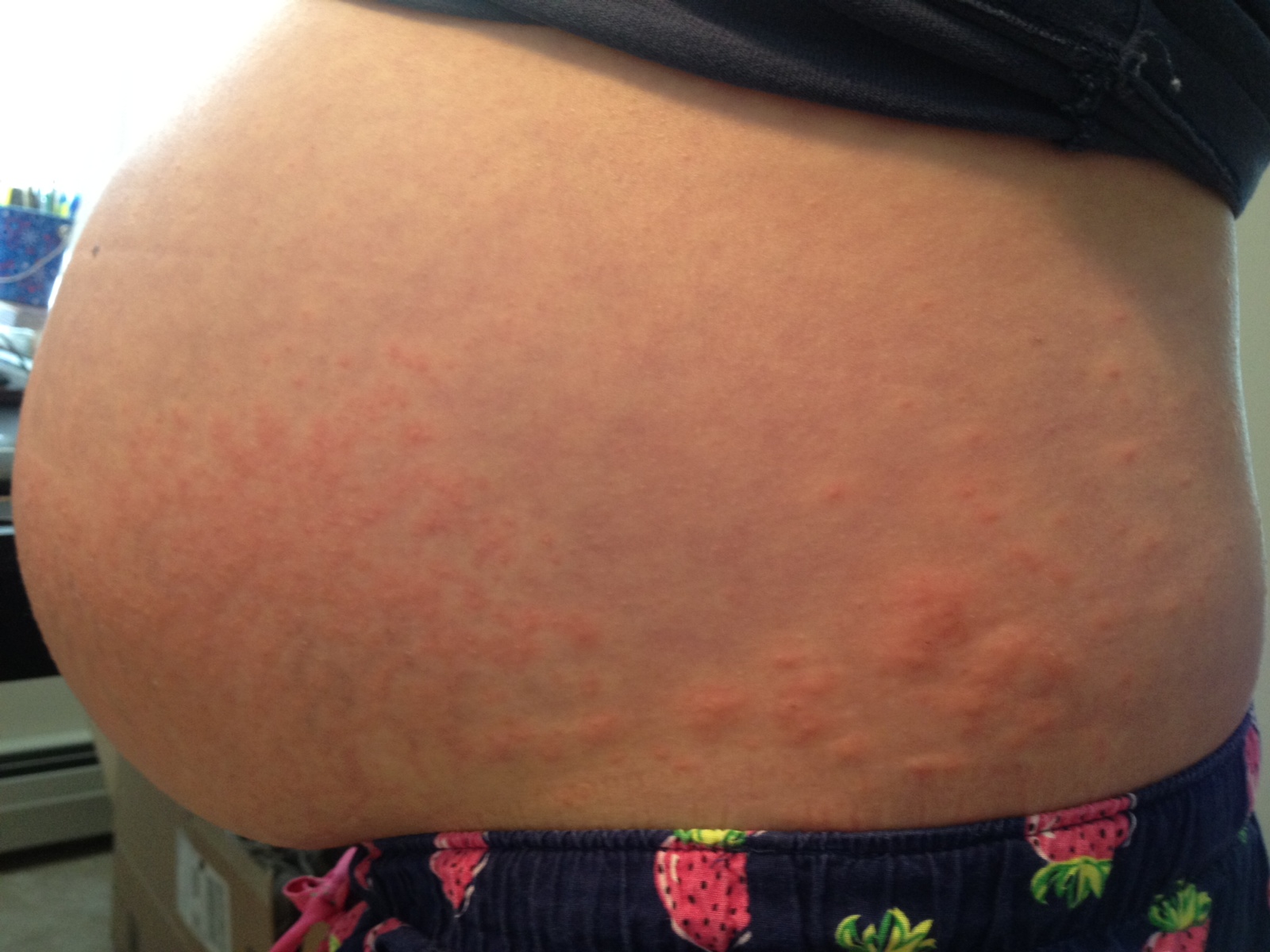 Itchy rashes during pregnancy can be caused by a number of conditions, but if it’s your first pregnancy and you are carrying a boy, there’s a high possibility you have a condition called pruritic urticarial papules and plaques of pregnancy (PUPPP) – also known as polymorphic eruption of pregnancy.

Roughly 1 out of every 150 pregnant women will develop the PUPPP rash. That’s roughly 1 percent, but it is the most common pregnancy rash in pregnant women. Fortunately, it does not harm your unborn baby in any way, but it is incredibly uncomfortable and annoying to you.

What is the PUPPP Rash?

The PUPPP rash is an incredibly itchy, red, and bumpy rash that starts on your abdomen, near your belly button. If you have stretch marks, it will start in and around them. The rash can spread to your thighs and other areas of your body – including your butt, breasts, arms, and legs. It’s usually most common in first-time pregnant women and those carrying twins or multiples. (It usually does not occur in subsequent pregnancies.)

Sometimes, the itchiness can be so intense but it usually does not affect your neck, face, or hands and feet. Sometimes, it is just itchy, red bumps on your skin. For some unlucky women, the PUPPP rash can look like a hive-like rash.

The below photos were sent to me by my best friend, who experienced pruritic urticarial papules and plaques of pregnancy (PUPPP Rash) during her first pregnancy. She was (like a majority of pregnant women with this common pregnancy rash) carrying a little baby boy. 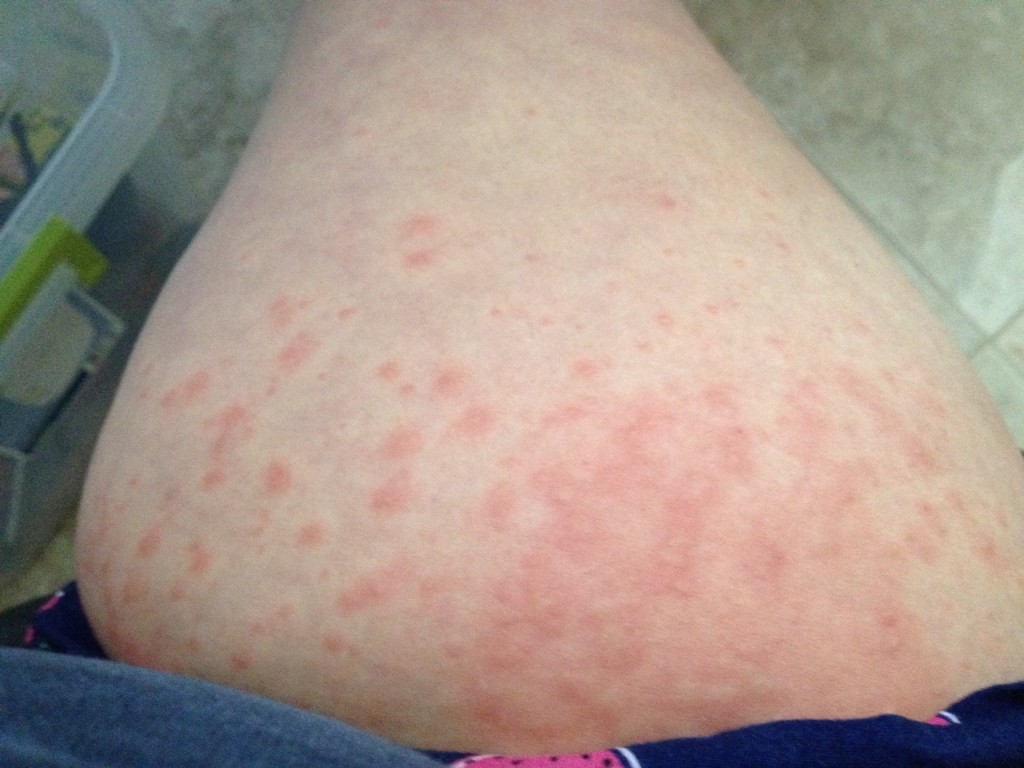 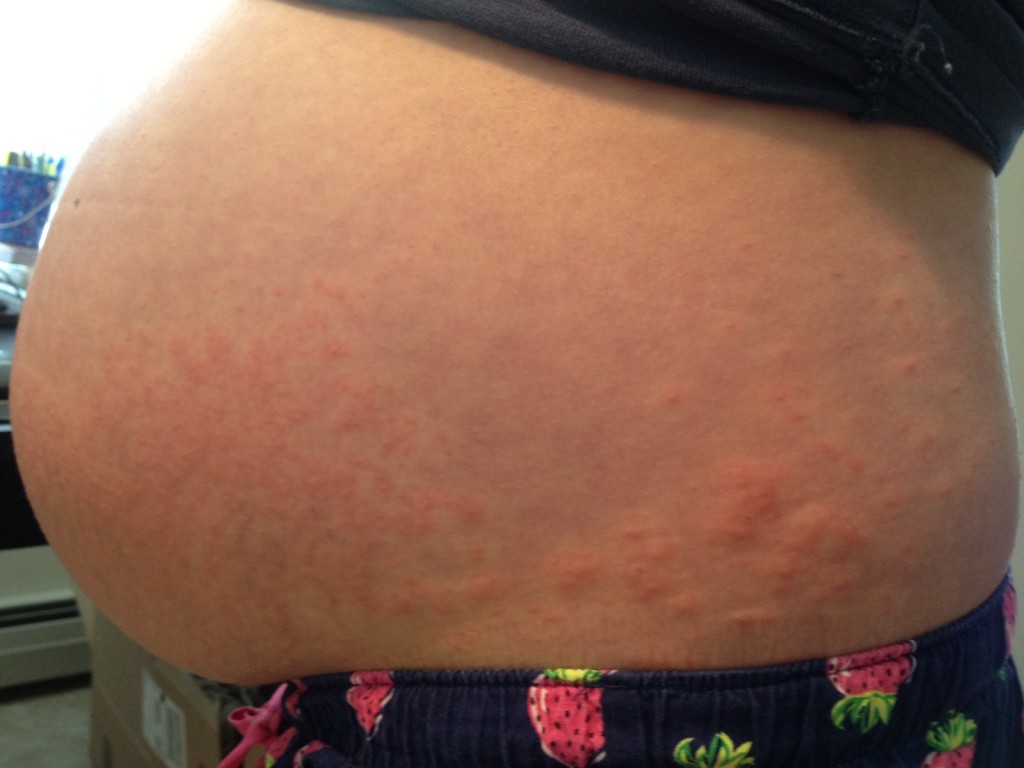 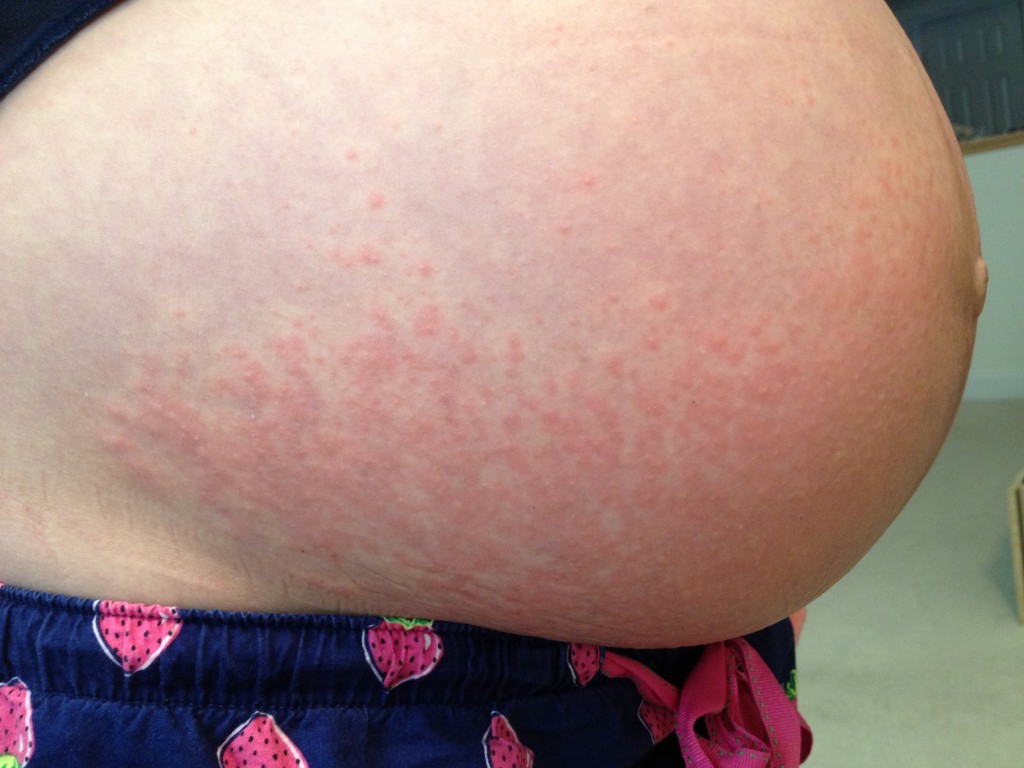 When Does the PUPPP Rash Start and End?

For most women, this itchy pregnancy rash starts in the second or third trimester. (In a majority of cases, it affects more women in their third trimester but it can occur earlier). This PUPPP rash can last up to 6 weeks, and it usually goes away within 2 weeks after you have your baby.

Causes of the PUPPP Skin Rash in Pregnancy

Researchers do not know what causes the PUPPP skin rash. Fortunately, it is not associated with any pregnancy complications – like fetal abnormalities, preeclampsia, or any hormonal disorders. There is also no evidence that the PUPPP pregnancy rash is caused by increased hormonal levels (which causes all the other symptoms that you experience in pregnancy).

Some studies suggest that the rapid growth of the abdominal wall during pregnancy can damage connective tissue and cause your body to have an inflammatory response – i.e. the itchiness and red skin rash.

One recently study found that male fetal DNA in the skin biopsies of the PUPPP rash, leading some researchers to believe that male DNA acts as a skin irritant. THis study is definitely interesting, since 70% of women who have PUPPP in pregnancy are pregnant with baby boys.

Another theory suggests that PUPPP is genetic, passed through your father’s side.

Because there are many conditions that can cause pregnancy skin rashes – including prurigo of pregnancy, intrahepatic cholestasis of pregnancy, mpetigo herpetiformis, and eczema – you need to go to see your OB/GYN or healthcare provider for an accurate diagnosis of rash.

If you do have the PUPPP rash, your doctor will probably prescribe steroid creams and ointments to help relieve your itchiness and prevent the rash from spreading.

But if you are not comfortable using steroid creams, you may want to use a more natural remedy – such as Grandpa Pine Tar Soap.

My best friend bathed with Grandpa Pine Tar Soap with amazing results. Her PUPPP rash disappeared within one week after using this soap every day, and it never came back for the length of her pregnancy.

Grandpa Pine Tar Soap is made with pine tar oil – a natural moisturizer with antiseptic properties – created in a closed kiln process. It’s a natural soap but it does have a strong smell but it has great reviews from anyone who has tried it. Available on Amazon, GNC, and a few other health stores. I do recommend it to help reduce your PUPPP discomfort.

Taking an oatmeal bath and applying cold compresses may also help. Using aloe vera gel after you shower or bathe may also alleviate your discomfort and itchiness.