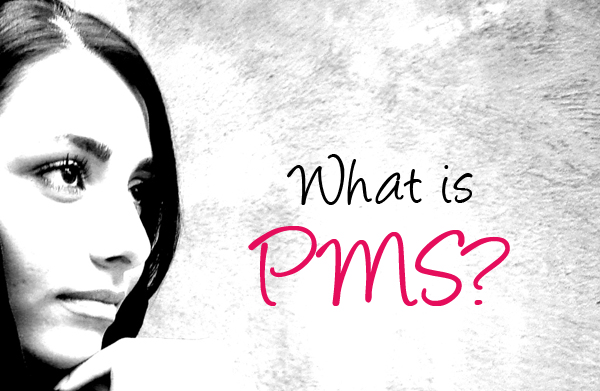 PMS stands for premenstrual syndrome, and it’s classified as a “medical condition” that affects women in their reproductive years (during the years that you have a menstrual period). When a woman is PMSing, she’ll experience a wide variety of emotional and physical symptoms – including crazy mood swings, irritability, bloating, and food cravings.

An estimated 3 out of 4 women (who are menstruating) will experience some level of premenstrual syndrome. PMS tends to be peak when a woman is in her late 20s and early 30s.

Premenstrual (PMS) symptoms can start up to 2 weeks (14 days) before your period starts. Your PMS symptoms disappear when your monthly period begins. (Or they disappear 2-3 days after you start to menstruate.)

Experts are not 100 percent sure what causes PMS. It’s believed that changes in hormonal levels that occur after ovulation contributes to your premenstrual symptoms. These hormonal fluctuations – specifically estrogen and progesterone – affect some women more than others; that’s why some women have worse PMS symptoms than others.

Fluctuations of serotonin – the neurotransmitter that plays an important role in regulating emotions and moods – also play a role in causing premenstrual syndrome. A lack of enough serotonin during the PMS time period (after ovulation and before your period arrives) can contribute to fatigue, sleep problems, food cravings, and PMS depression.

There have been some studies that indicate nutritional deficiencies can play a role in causing PMS symptoms. Low levels of vitamins and minerals, including a lack of enough vitamin B6, can contribute to PMS symptoms.

Although it’s a misconception that stress causes PMS, it doesn’t cause PMS. However, stress can make your PMS symptoms worse.

There are many symptoms of PMS. Premenstrual syndrome comes with emotional and physical symptoms. Some women only feel slightly bloated during PMS, while unlucky women have extreme exhaustion, swollen and sore breasts, trouble concentrating irritability, and even nausea.

The list of PMS symptoms is long, but fortunately, most women only experience a handful of premenstrual symptoms every month. The severity of your symptoms will vary from month to month; some months will have milder symptoms, other months have the worst symptoms.

The most common symptoms of PMS include the following:

Because PMS symptoms can mimic the early signs of pregnancy – fatigue, bloating, headaches, nausea, unexplained weight gain, emotional changes, swollen and sensitive breasts – if you think you may be pregnant, it’s important that you take a home pregnancy test on the day of your missed period.

For more on this topic, read PMS or Pregnancy?

PMS symptoms are annoying, but they aren’t severe enough to become interfering with your common life. When your PMS symptoms interfere with your ability to function in society – like at school, or at work – you may have a condition called Premenstrual Dysphoric Disorder (PMDD).

If you’ve noticed that your PMS symptoms occur at other times during the month (not just the week or two before your period arrives), your symptoms may be unrelated to PMS altogether. Premenstrual symptoms share similarities to thyroid disease, chronic fatigue syndrome, perimenopause, depression and anxiety.

There’s no cure for PMS. It’s something that most women have to deal with every month. However, there are different ways that you can manage your symptoms. There is no one cure-all PMS remedy that works for every single woman. You have to try different PMS remedies and treatments to find the one that works best for you.

If you can’t alleviate your symptoms using the above natural PMS remedies, you may want to talk to your doctor about what medicines may help you. There are a number of over-the-counter medications that you may want to try to reduce the severity of your PMS symptoms.

If over-the-counter PMS medications don’t help you, or if you prefer not to use them, you may want to talk to your doctor about birth control pills, which can help reduce the severity of PMS since they regulate hormones and prevent ovulation.

Antidepressants can also be used to help treat PMS, especially if your PMS symptoms include depression, anxiety, and severe irritability.

Talk to your doctor if you have any questions or concerns about your PMS symptoms.