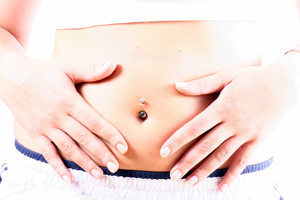 For many women, ovulation comes and goes without any symptoms. Only those who are paying attention to changes in their cervical mucus, or charting their basal body temperature will notice that they’ve ovulated. Sometimes, women have physical ovulation symptoms – like ovulation pain (a symptom called Mittelschmerz in the medical community).

Ovulation pain is not a common sign of ovulation, but it’s not uncommon either. An estimated 20 percent of women in their reproductive years will experience painful ovulation. This means 1 in 5 women will experience Mittelschmerz around the time they ovulate.

What is Ovulation Pain (Mittelschmerz)?

Mittelschmerz is the medical term for pelvic pain that women feel during the time they ovulate. It’s a German word that literally translates into “middle pain” – pain that occurs in the midway point of a regular menstrual cycle, since ovulation typically occurs on day 14 of a 28-day cycle.

Ovulation pain is typically felt in the pelvic area or lower abdomen. It’s often one-sided pain, and it’s believed to be felt on whatever side the egg is being released from. Women have two ovaries – one on the left, and the other on the right side of the body – but only one of the ovaries will release a mature egg that month. For this reason, ovulation pain is often one-sided lower abdominal pain, rather than pain on both sides.

If you happen to experience Mittelschmerz around the time you ovulate, you might have mild twinge or severe, sharp abdominal discomfort. Some women describe ovulation pain similar to menstrual cramps. Other women find that their pain is so intense, so severe that they can confuse this ovulation symptom with appendicitis or another health condition.

It’s not uncommon for ovulation pain to be accompanied with other uncomfortable symptoms, including light spotting (called ovulation spotting) and nausea.

You may experience Mittelschmerz on the same side month after month, or the pain may switch to the other side the very next month. There is no consistency on what side the ovulation pain will come from.

Ovulation pain will only last several minutes, or a couple of hours. In some cases, it can last for one or two days (24 to 48 hours), but it’s usually short lasting and will go away without need to go see a doctor.

How to Get Relief from Ovulation Pain

Experiencing painful ovulation isn’t anything to worry about. It’s a normal part of a menstrual cycle. However, if your pain bothers you, you can take an over-the-counter pain reliever, such as Tylenol or Advil, to ease the ache. If you have consistent menstrual cycles and you’ve been tracking them with a period calendar app or another method, you may want to start taking your OTC pain reliever of choice before you ovulate.

If your ovulation pain is excruciating, and you don’t plan on getting pregnant anytime soon, you may want to talk to your healthcare provider about birth control pills, which will prevent ovulation and thus prevent you from experiencing ovulation pain in the first place.

Natural methods of getting relief from your ovulation pain include using a heating pad on the affected area. Heating pads do wonders when you’re having menstrual cramps and ovulation pain. They’re fairly inexpensive, too, but they are definitely effective at helping ease any aches and pains you may have. (I love my heating pad!)

Taking a warm bath may also give you some pain relief. Plus, it will relax you and help de-stress you.

Finally, make sure that you drink plenty of water during the day. Dehydration typically makes ovulation pain (and menstrual cramps) worse. So keep well hydrated, and you may have less severe pain.

Experts aren’t sure the exact cause of ovulation pain (Mittelschmerz), or why most women don’t ever experience this sign of ovulation and some do. However, researchers do have a few theories. The leading theory involves an egg’s development in the ovary.

During ovulation, a mature egg bursts out of its follicle, along with some of the follicular fluid that surrounded it in the ovary and some blood. Sometimes, the blood and follicle fluid can irritate the lining of a woman’s abdominal cavity, and this can cause discomfort and pain. Ovulation pain is usually short lasting – it doesn’t ever last longer than a day or two – because the body absorbs the blood and fluid, which then causes the pain to disappear.

Another explanation for ovulation pain involves the physical stretching that occurs during ovulation. Just before ovulation – the ovary releasing a mature egg – follicle growth can stretch the ovarian surface, which may cause pain or discomfort.

Whatever the cause of Mittelschmerz, this symptom only occurs with ovulation. You will only experience the pain around the time you ovulate – which is typically 14 days before your period starts.

Ovulation Pain or Another Health Problem?

When ovulation pain is severe or excruciatingly painful, it can be mistaken for other health problems, such as endometriosis, appendicitis, a urinary tract disease, kidney stones, ulcers, pelvic inflammatory disease, an ovarian cyst, and other health concerns. For this reason, you need to contact your doctor if you experience one-sided abdominal pain that is accompanied with:

Ovulation pain should only occur two weeks before your period is due. If you regularly experience Mittelschmerz, make sure that you chart your menstrual cycles, write down any episodes of pain and when they occur during the month, the location of the pain (is it on the left or right side).

Painful ovulation should be discussed with your doctor, since you need to rule out any other potential cases of lower abdominal pain. Your doctor may want to do an abdominal and pelvic examination to make sure that everything else is normal.

If your one-sided pain is indeed ovulation pain, you should look on the bright side. Having ovulation pain may be helpful when you want to try to conceive. Don’t worry – although Mittelschmerz is uncomfortable, it doesn’t have any longer-term consequences. It is not a disease and absolutely normal for some women.

Can You Ovulate Without a Period?
10 Causes of Pelvic Pain in Women
Ovulation Symptoms: Signs to Tell When You Ovulate