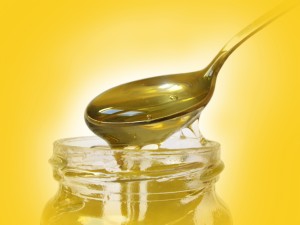 You’ve probably heard that feeding an infant honey is a no-no. Have you ever wondered why it’s not safe to feed babies honey? The reason is infant botulism – a rare but serious illness that may cause constipation, weakness and loss of muscle tone, a weak cry, weak suckling, and respiratory distress. In rare cases, babies with botulism can suffer from paralysis and even death.

Infant botulism is no laughing matter, and it’s caused by spores of the bacterium Clostridium botulinum. Botulism spores are found in honey products, soil, untreated water, and on the unwashed surfaces of fruits and veggies that are unpeeled. Unfortunately, these spores are hard to kill, because they are resistant to heat and some spores can survive boiling.Botulism spores are usually harmless to children over age 1. That’s because the microorganisms normally found in your intestine keep the bacteria from growing. A baby has an immature digestive system, which makes your infant’s intestines the perfect environment for the spores to grow.

When a baby accidentally swallows botulism spores, the bacteria can germinate into bacteria that colonize your baby’s intestines. As the bacterium multiplies, it produces a toxin, which is absorbed and causes infant botulism.

Signs and Symptoms of Infant Botulism

Infant botulism usually occurs in young babies, between 6 weeks and 6 months old, however babies up to one year old can be infected.

Common signs and symptoms of infant botulism include:

Symptoms usually appear between 3 and 30 days after the baby has ingested the spores. Constipation is usually the first sign that parents notice.

When infant botulism is treated in the hospital, the baby is given an antitoxin, called Botulism Immune Globulin Intravenous (BIGIV). In most cases, the infant makes a full recovery. In rare cases, permanent paralysis and death can occur.

While you can’t completely avoid the risk of infant botulism – because the spores can also be found in dirt, you can do your best to prevent your baby from ingesting it. One of the best ways you can protect your baby is by not feeding him any honey or honey products.

To be even safer, don’t cook with honey. Don’t feed your baby honey until he is at least one year old. Don’t use it any baked breads or pudding, and don’t use it any homemade baby food that you may make.

Researchers don’t know why some babies get infant botulism, while others don’t. But you’ll want to keep your baby healthy by avoiding any honey products for the first year of your infant’s life.