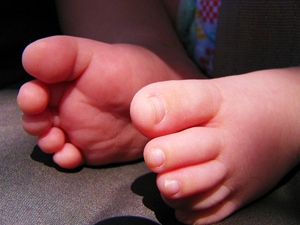 Human chorionic gonadotrophin (hCG for short) is the unique pregnancy hormone that is produced by the cells of the placenta. hCG is needed to maintain the pregnancy and it also aids with fetal development. Experts theorize that this special hormone also plays a role in suppressing a pregnant woman’s immune system (so that her body doesn’t reject the developing baby as an “intruder.”)

Blood tests can also check for hCG to confirm pregnancy. In 5 percent of all pregnant women, levels of hCG can be detected in the blood at 8 days after conception – before the woman misses her period. For the other 95 percent of expectant mothers, a blood test can detect hCG levels by 11 days after she’s conceived.

Why is hCG Detected in the Blood First?

To answer this question, you have to understand some basics of conception.

During conception, your egg is fertilized by your partner’s sperm in the fallopian tube. Afterwards, your future baby (which is just a ball of cells right now) moves down the fallopian tubes and enters your uterus, where it attaches to the uterine wall. This is called implantation. After implantation, the developing placenta releases hCG into your bloodstream. Some hCG is also passed in your urine.

The initial level of hCG in your pregnant body will be low, but will progressively increase. In roughly 85 percent of healthy pregnancies, the levels of hCG will double every 30-72 hours. Between 7 and 12 weeks of pregnancy, hCG will start to peak, then decrease slightly. After 16 weeks pregnant, the level will remain relatively constant until you have your baby.

Try not to focus too much on hCG levels. They can vary widely between pregnancy to pregnancy, person to person. For example, some pregnant women have no measurable level of hCG on the day of their missed periods, while others have readings of 400 mIU/ml.

Overview of hCG Levels in Pregnancy

Below is a guide of normal hCG levels at different stages of pregnancy.

These numbers give a normal range. If your hCG readings fall outside of this guideline, try not to worry. It’s possible that your due date is off; you’re carrying twins or multiples; or that this pregnancy is just special.

If you’re worried, talk to your doctor about your hCG results. He or she should be able to reassure you that your baby is perfectly healthy.

Low hCG Levels in Pregnancy – Should You Be Worried?

If you have low hCG levels, you are naturally worried. There are a number of reasons why your hCG results are low, so you should discuss your worries with your doctor.

Keep in mind that many healthy pregnancies have low hCG levels, so low hCG results may not mean anything is wrong with your pregnancy.

If you get a low result, your doctor can recheck your hCG levels with a simple blood test within 2-3 days.  If you’re ever worried about anything, please have a frank and open conversation with your healthcare provider about your concerns.

On the other hand, if you get a high hCG level during pregnancy, it could mean any of the following:

If you get a high hCG result, your doctor will want to recheck your levels in a few days to evaluate any changes. If your healthcare provider believes that something is wrong, he or she will let you know.