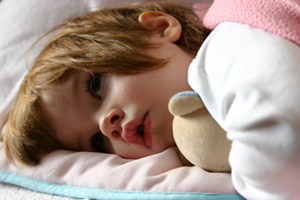 Sleep is a vital part of our lives. For adults, when we don’t get enough sleep, we are groggy, cranky, and tired. Our concentration isn’t so great, and we are more vulnerable to infections and illnesses. Like adults, children also need to get enough sleep. Younger kids require more sleep than older children, and they may need naps during the day.

When a child is sleep deprived, it can cause them to develop behavioral problems and become very cranky and moody. Their performance at school may suffer, and they aren’t as alert as they need to be to learn. That’s why it’s very important that you help your kids develop good sleep habits at an early age.

Why Do Children Need Sleep?

If you’re a new parent, you may be wondering, “Why does my baby sleep so much?” The simple answer is that babies are growing, and studies have shown that sleep fuels physical growth.

In fact, researchers have noticed a strong link between infant growth spurts and sleep. Babies tend to sleep longer, or have more bouts of sleep, when they are about to have a growth spurt.

For adults and children alike, sleep affects our cognitive processes. We become more irritable and less tolerant when we don’t get enough sleep. Just like your car needs a tune-up, the brain needs sleep to refuel. Although experts aren’t 100 percent sure, they believe that your brain sorts through and stores information about your day, it replaces chemicals, and solves problems during sleep.

The brain undergoes its own tune-up when we sleep. Dreams may have something to do with it, but experts aren’t really sure what dreams accomplish. But we do know that when we dream, the brain is very active. Some scientists argue that dreams help the brain reorganize and store psychological information from your day; others argue that dreams are a clearing-out process for the brain to help it replenish for the next day.

Whatever the reason, all children need their sleep so that they can grow and feel their best. As you know, kids can get pretty cranky and irritable when they don’t get enough sleep. Some even throw temper tantrums when they’re tired.

Another reason that children need sleep – it strengthens the immune system. When we don’t get sick, our T-cells go down and inflammatory cytokines increase, which means you are more likely to catch a cold or flu. Sleep deprivation basically suppresses your immune system.

Recent studies have also indicated that kids who have persistent sleep problems – like they have a hard time falling asleep, or staying asleep – are more likely to experience depression and anxiety disorders later in life. These children also are more likely to abuse alcohol and drugs when they grow up, too. Children’s sleep problems are also linked to causing aggressive behavior, as well as learning and memory problems.

How Much Sleep Do Children Need?

If you ask researchers about how much sleep a child needs, they’ll tell you that there’s no magic number. There is, however, a range of hours of nightly sleep that children need, depending on their age. Every child is unique and has different sleep needs. Some require more sleep, and others need less. Children need a lot of sleep – even more than you realize.

Sometimes, parents can confuse their child’s poor sleeping habits, refusal to take naps, or refusal to go to bed before 9 or 10 at night with the idea that their kids need less sleep, but this is usually not the case. Sleep experts believe that children can become hyper at bedtime due to sleep-deprivation. It’s overtired behavior.

As a parent, you’ll learn how much sleep your child needs by simply paying attention to your child’s behavior. If you’re asking yourself, “Is my child getting enough sleep?” Ask yourself the following questions:

If the answer is “Yes” to these three questions, this may mean that your child needs to get more sleep at night. Developing good sleeping habits, including sticking to an appropriate bedtime, may help your child get the sleep that his or her body needs.

Although researchers can’t pinpoint exactly how much sleep children need, there is a “rule of thumb” that many sleep experts have agreed on. According to the National Sleep Foundation, children generally need the following amounts of sleep:

How to Promote Healthy Sleep in Children

A tired kid is a cranky kid, and with all the many negative consequences of sleep deprivation in children, it’s really important that parents step in and promote healthy sleep in their kids. There are relatively simple things you can do to ensure your child gets enough sleep.

For one, make sure that your children have a consistent bedtime – during the weekdays and on the weekends.

To help young children fall asleep, it’s a good idea to create a calming bedtime ritual. For example, you may want to read a bedtime story, or sing lullabies. Even taking a bath every night can become a ritual that helps soothe your child to sleep.

For older children and teenagers, you will want to limit their use of technology at least thirty minutes before bedtime. Research has shown that the lights from TVs and computers can suppress your body’s production of the sleep hormone, melatonin. This can make it harder for your child to fall asleep. Plus, television, the Internet, video games, texting and using cell phones can be very stimulating to the brain, and this can also make it harder for an older child to sleep well.