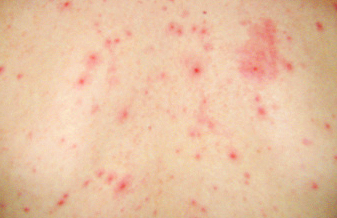 Although we normally think of chickenpox as a harmless childhood disease, it is a highly contagious viral illness that can pose dangers and risks to your unborn baby – if you catch it for the first time during pregnancy.

Once you catch chickenpox, the virus stays dormant or asleep in your body for the rest of your life. In other words, you are immune from the virus and cannot catch it again.

If you did not catch chickenpox as a child (or had the vaccine), and you somehow end up getting chickenpox when pregnant, there is a small chance the virus can harm your unborn baby. Fortunately, there is a simple blood test that your doctor can perform to check for your immunity to the virus.

The Dangers of Chicken Pox During the First Trimester

If you happen to catch chickenpox when pregnant, there’s a good chance that your baby will be fine. However, timing is everything. Chickenpox (also called varicella) is most dangerous in the first 20 weeks of pregnancy, and in the few days before you give birth.

Congenital varicella syndrome is an extremely rare birth defect that causes the babies to have scars; malformed and paralyzed arms, legs, hands, and feet; smaller than normal sized head; low birth weight; seizures; blindness; and mental retardation. Congenital varicella syndrome only affects to 1 to 2 percent of babies whose moms caught chickenpox before 20 weeks of pregnancy. The risk of this syndrome is highest (around 2 percent) if you catch chickenpox between 13 and 20 weeks of pregnancy.

Fortunately, after 20 weeks of pregnancy, the danger of chickenpox is minimal. That’s because your body develops antibodies to the virus and passes them to your unborn baby through the placenta, which protects him or her from any harm.

In the final trimester, chickenpox can be problematic for your unborn baby – but not dangerous – if you happen to catch the illness 5 to 21 days before you give birth. If a mother catches chickenpox this late in her pregnancy, her unborn baby may get chickenpox. But the illness won’t be too serious, due to the antibodies received from the mom. There are a small number of babies who are exposed to the chickenpox virus in uterus who don’t have any signs of chickenpox after birth, but they can develop shingles during early childhood.

In the third trimester, the most dangerous time to catch chickenpox is five days before delivery. This is because your unborn baby is exposed to the chickenpox virus and there isn’t enough time for him or her to receive the protective antibodies from you. As a result, there is 17 to 30 percent chance that your baby will develop newborn chickenpox (called neonatal varicella), which can be extremely dangerous and even life threatening to the baby.

Fortunately, if you develop a chicken pox rash between five days before delivery and two days afterwards, your doctor can reduce your baby’s risk of neonatal varicella (newborn chickenpox) by giving him or her an injection of varicella zoster immune globulin – which is a blood product that has chickenpox antibodies.

If your newborn baby does display signs of chickenpox – like a fever or a chicken pox rash – he or she will be treated with an antiviral drug called acyclovir.

If a woman catches chicken pox in pregnancy, there is a good chance that she and her unborn baby will be healthy and fine. However, because the varicella (chicken pox) virus can cause serious complications for some women – like pneumonia for some pregnant moms, and congenital varicella syndrome for the unborn babies – you have to be aware of any signs of chickenpox if you’ve never been exposed to the virus before.

You should contact your doctor if you notice any of the following chicken pox symptoms:

Most people experience chicken pox symptoms after 14 to 16 days after exposure to the virus. Chicken pox can make adults very, very sick. If you notice any signs of chickenpox, contact your obstetrician, midwife, or healthcare provider right away.

Your healthcare provider may give you a prescription for an antiviral medication – called acyclovir. Your fever might be treated with Tylenol, and you can use calamine lotion to help reduce the itchiness.

You may need to be hospitalized if you have any signs of pneumonia – like having difficulty or discomfort when breathing, coughing, and a fever with rapid breathing.

How to Prevent Chicken Pox

If you’ve never had chicken pox, the best way to prevent it before pregnancy is to get the chicken pox vaccine. However, you have to wait at least three months after receiving the vaccine before you can try to conceive. You cannot get the vaccine when you are pregnant.

The best way to prevent chicken pox during pregnancy is to avoid being around anyone who is infected, or who is sick. You need to avoid anyone who has shingles, because shingles can occur if the chicken pox virus is reactivated.