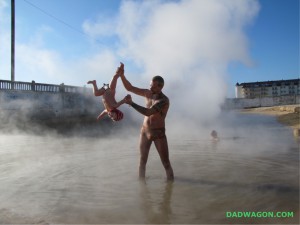 Holy moly! Do you remember the baby swinging yoga video I posted about two weeks ago? “Baby Yoga with Lena Fokina,” which showed a woman tossing and swinging a little naked baby around, had been circulating on the net. No one knew whether it was a big hoax or if it was for real.

It was too graphic to believe. The extreme acrobatics of those babies seemed impossible. There’s no way that a baby is that flexible, and the woman held the infant by her ankles and arms. There was no way it was real – but sadly it is.

Blogger Nathan Thornburgh from DadWagon.com tracked down and scored an excusive interview with Lena Fokina – the crazy lady from the baby yoga video. He Skype-chatted with her from her home in Egypt. (Mr. Thornburg also writes about Russia for Time Magazine.)

It’s a very interesting interview. It turns out that the baby in the original video is a girl named Platona Goryun from Ukraine. The video was filmed two years ago, but her father only uploaded it last month. According to DadWagon.com, little Platona is a healthy toddler, whose father still swings her from her arms and ankles.

Lena Fokina’s “dynamic gymnastics” for newborns (her words) may shock many of us, but she doesn’t see anything wrong with them. When Mr. Thornburg asked about her response to YouTube taking down the video, as a violation on their policy of “shocking and disgusting content,” she said:

“Did they notice that the babies aren’t crying—they’re even laughing—and that this system has been used for over thirty years in Russia and the children are all alive and healthy?”

And what’s the goal of the baby yoga? Baby swinging yoga is supposed to teach these poor babies more mobility, more trained skills, more freedom, and independence. “We learn from nature and teach our offspring to survive,” Fokina says.

(“Offspring” in the United States are doing perfectly. We all learn to walk and talk, use the toilet, and have independence in time. We don’t need to subject our babies to crazy gymnastics to achieve this goal.)

At the end of the video, Lena Fokina is asked if she’s ever had any legal problems from baby yoga. She denies any problems.

“We are humanists! And we don’t do anything wrong. On the contrary, many Egyptian parents learn these techniques and go diving, in their niqab, with us,” she says.

Read the entire interview for yourself, but it leaves a bad taste in my mouth. Chalk up to a difference in culture, but baby swinging yoga still shocks me. I’m absolutely shocked that it’s REAL.

For those of you who are curious, here is the original baby swinging yoga video. (Be warned – it is GRAPHIC and PAINFUL to watch.)