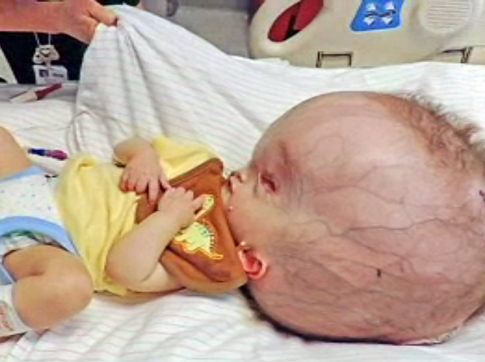 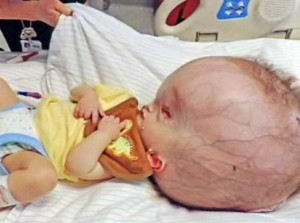 Have you heard about “Baby Klaus” in Texas? Baby Klaus is an 11-month-old with a severe case of congenital hydrocephalus – a rare condition that’s characterized by excess buildup of cerebrospinal fluid on the brain at birth. Hydrocephalus is sometimes known as “water on the brain,” and it affects about 1 in every 1,000 newborns.

In normal infants, the cerebrospinal fluid (CSF) drains and is absorbed by the body. But in babies with hydrocephalus, the fluid does not drain and it accumulates, leading to increased pressure on the brain. If left untreated, this can cause brain damage, mental and physical problems in the child. Early diagnosis and treatment in the first 3 or 4 months of the infant’s life helps prevent long-term problems and consequences.

Baby Klaus and his severe case of Congenital Hydrocephalus

Unfortunately, in the case of Baby Klaus, he has been living with this condition for almost a year. The extra fluid has caused his head to swell more than double its normal size. According to the New York Daily News, Baby Klaus’s head has swelled to 131 percent larger than an average newborn’s head.

Why have Baby Klaus’s parents left their son’s condition untreated? It’s not due to a lack of love and care for their baby. It’s because several doctors near the parents’ home in west Texas refused to operate on the baby.

Refusing to give up, the Klaus family finally found Dr. David Jimenez, a neurosurgeon and chairman of the department of neurosurgery from the University of Texas Health Science Center in San Antonio, Texas, who agreed to operate on their son.

Dr. Jimenez and his team inserted a shunt system into the baby’s brain. A shunt is a flexible, plastic tube that will drain the fluid and relieve pressure on the baby’s head. Because Baby Klaus’s case is severe, progress will be slow but the doctors are hopeful.

“This is something that probably is going to take weeks, maybe over a month, maybe longer until we get to the point that we’re comfortable enough to put in a permanent stunt,” Dr. Jimenez told reporters at KENS5-TV in San Antonio.

Baby Klaus has a long road of recovery ahead of him. His parents are praying for a miracle for their son, who is at risk of becoming blind, dead, and disabled. But there is hope – post-operation, Baby Klaus’s head is already nearly a foot smaller than when his parents brought him in a week before.

He will require extensive reconstructive surgery in the future.

Doctors still do not understand exactly what causes or triggers hydrocephalus in babies. The condition is believed to be caused by an imbalance between how much cerebrospinal fluid (CSF) the brain makes and how the baby’s body is able to process it.

Normally, CSF follows through and out of the chambers of the brain, around the brain and spinal cord, where it gets absorbed by tissues surrounding this area. With congenital hydrocephalus, the fluid does not move where it’s supposed to or it’s not absorbed like it should. In rare cases, the baby’s brain makes too much fluid.

Babies with hydrocephalus may have an inherited genetic abnormality that causes the disorder, or they may have a developmental birth defect, such as spina bifida. Other causes of congenital hydrocephalus include certain infections that the pregnant mom passes to her baby (such as toxoplasmosis, syphilis, and meningitis), and bleeding in the baby before birth.

Unfortunately, there is no permanent cure for hydrocephalus. When initial treatment – with the shunt system – is successful, CSF can buildup within the brain again and cause symptoms to come back. About half of all shunts fail within the first five years, and this can cause fluid to build back up. When the shunt fails, it typically requires repair or a replacement.

After treatment, the baby or child has to be watched carefully to make sure that the excess fluid is draining. Parents must also watch for signs of infection and other problems in their child.

Taking care of a child with congenital hydrocephalus can be difficult, because the child may have special needs, developmental problems, and etc. Fortunately, there are a number of support groups and organizations available to help these families.